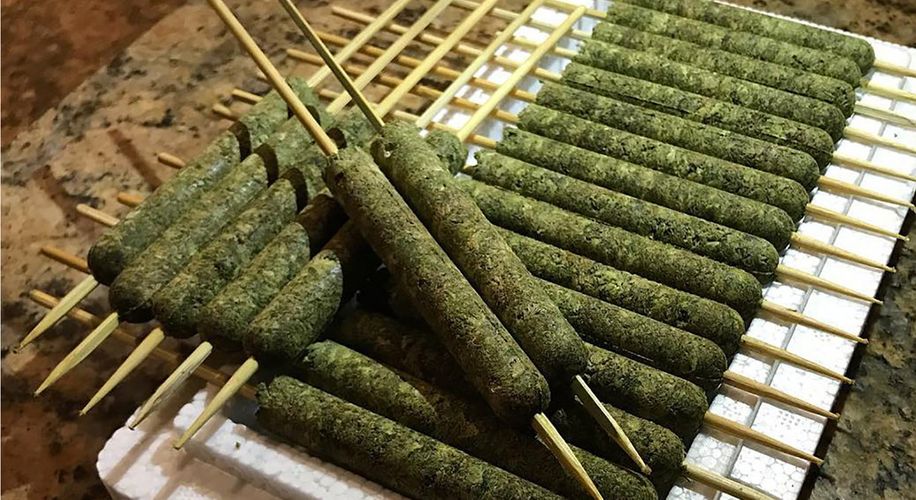 There are few cannabis origins stories as fascinating as Thai Stick. Its massive importation from Thailand, and subsequent extinction from the American cannabis marketplace occurred in a relatively short time, though its impact on pop culture carries on in music and movies. Mainstream references to the product have continued for almost five decades.


What is a Thai Stick?

Americans were introduced to the Thai Stick strain starting in the late 1960s when soldiers were sent off to the Vietnam War. Working with various networks of serviceman, Thai Stick was brought to the U.S. by the Brotherhood of Eternal Love – a sort of hippie mafia responsible for smuggling many landrace strains into the U.S.

Thai Stick is not the actual strain name – but rather the product of two combined elements: a Thai landrace sativa, and a unique process of preparing buds in an exotic and aesthetically pleasing fashion.

As its name suggests, Thai Stick originated in Thailand, where locals typically skewered marijuana buds on long thin bamboo sticks. The full bud, still intact, was then tied to the sticks using fibers pulled from the cannabis plant itself. After being tightly secured, the buds were often dipped in hash oil for added potency. Lastly, the bud was wrapped in cannabis leaves, and often secured with hemp fibers. The average THC percentage of Thai landrace was about 13%. If dipped in hash oil, as they more than likely were, the THC percentage would typically increase by 5-10%. While its appearance and preparation are what earned the Thai Stick its name, the most important component at the time was the Thai landrace sativa which served as the vehicle for Thai Stick's curious appearance. The area's hot temperatures create a perfect environment for sativa to thrive, and Thai varieties are said to be the first landrace sativas discovered.. While Thai Stick has gone extinct, the Thai landrace genetics are the backbone for modern varieties such as the Haze family. The gift of these genetics was much more important than the novelty stick on which it traveled.


How to make a Thai Stick

Making a Thai Stick, or Cannagar, is quite simple and doesn't require a ton of supplies. You will need a wooden skewer, hash oil, hemp string, several large fan leaves from the cannabis plant, and of course - the strain of your choice.


Instructions for making a Thai Stick:

Step 1: Select some buds to use. Avoid anything dense, as the buds need to be manipulated without falling apart.
Step 2: Coat the entire wooden skewer in hash oil to create an adhesive surface.
Step 3: Press the buds to the now sticky skewer until it is completely covered like a popsicle. Then, wrap the buds with hemp string to secure them to the skewer - but do not wrap too tight.
Step 4: Wrap the entire contents of the stick in cannabis fan leaves, once again using hemp string to secure them.
Step 5: Place Thai Stick in refrigerator for two days. Once removed, let sit for one day - and then...enjoy!

While a Thai Stick can be made today using any combination of strains for flower and hash, the physical effects of the legendary Thai Stick are pure sativa. GI's would experience a period of uplifting energy that gave way to sharp focus and intense creativity. The stimulating effects were unparalleled in the treatment of depression and ADHD, whether soldiers understood the effects to be medicinal at the time or not. (Remember, if you suffer from anxiety, I recommend avoiding most sativa strains as they tend to increase heart rate.

Thai Stick will forever remain in the rich history of the cannabis plant. Recent incarnations have risen in the form of “Tarantula" or “Moon Rock" joints – which are joints rolled in hash oil, and then covered in kief. But true Thai Stick is gone, and all the gimmicks used by modern day cannabis connoisseurs to replicate it will never capture the historical significance and counterculture fascination with the mythical Thai Stick.